In Apladalen you can stroll under the enormous spreading oak trees, look at houses from the 18th and 19th centuries, explore the secrets of the old vicarage and pat sheep, goats and rabbits. The park also contains the biggest playground in Värnamo, an open-air stage, sales of handicrafts and a popular café.

22 hectares of nature and heritage parkland – in the middle of Värnamo!

The children can look at the animals and play in the park while the adults take a look at the handicrafts and the beautiful 18th and 19th century houses. At Prästgården Vicarage are some preserved interiors from a 19th century parsonage as well as wall hangings and different tools and household items from the area. Here you can also see the statue by Carl Snoilsky called "Per and Kersti" - a couple who met in Värnamo to become engaged.

There is also an herb garden, animals, beehives, a café and an outdoor stage where there are music performances on certain dates during the summer. 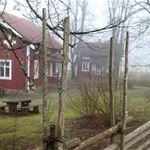 Distance: 13.2 km
Store Mosse is a national park that comprises the largest untouched marshland south of Lappland. The park is 15 x 12 km in extent, and the vegetation here is similar to that of the wilderness of Norrland. The park offers more than 40 km of trails and boardwalks.
Book now
Build: 23/09/2020 19:01:06, Host: online3core17, DB: o3.cbguide-5670.cbischannel-330.v1 online3data04.db.citybreak.com:8080, Controller: Activity, Action: showdetails